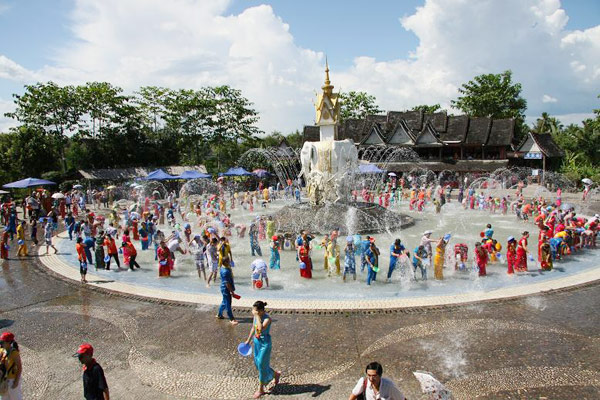 The Water-Splashing Festival is the New Year's celebrations of the Dai ethnic minority in Xishuangbanna Dai Autonomous Prefecture, southwest China's Yunnan Province. Annually, it is held on the 24th to 26th day of the sixth month of the Dai calendar. In Gregorian calendar, the festival always falls in the mid-April, and lasts at least three days. Jinghong, the capital of Xishuangbanna Prefecture, usually celebrates it from April 13 to 15.

For Dai people, the annual Water-Splashing Festival is the most important holiday. The three-day celebrations are filled with various activities, including dragon-boat races, traditional Dai dances, the launching of rockets, parades and fairs; but water splashing is central to all.

About the origin of the festival, legend has it that once upon a time, there was a "demon of fire" who brought all the pains and sufferings to the local people. All the people hatred him, but his magic was too powerful for them to overcome. One day in the sixth month, his seventh wife, who had been kidnapped from the village, tricked him into revealing his weaknesses. As he slept, his wives killed the demon by strangling him with a single hair of his own. Unfortunately, wherever his cut-off head tumbled about, there were raging flames. However, once the head was carried in the arms of one of the girls, the fire would immediately go out. So the girls decided to hold the post in turn, each for one year. At the time of New Year when they switch shifts, local people would gather to splash water on the relieved girl to clean the bloodstains on her body and help her recover from the year-long fatigue. 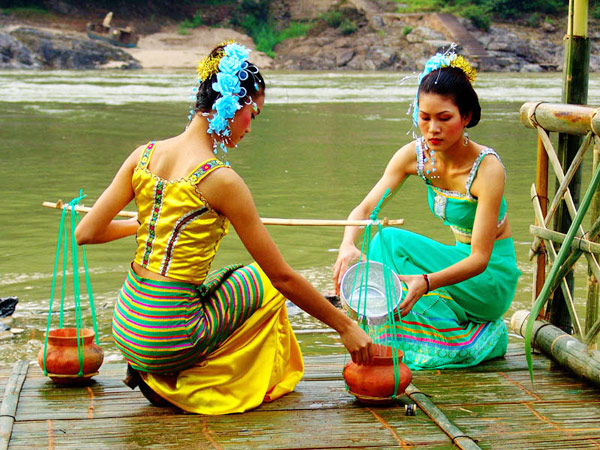 Ever since, the Dai people have been celebrating the new year by water-splashing to wash away the dirt, sorrow and demons of the old year and bring in the happiness of the new. In the Dai culture, water serves as a symbol of sanctity and brightness. On April 15, 2012, tens of thousands of people throughout the world gathered to celebrate the Water-splashing Festival in Jinghong City. Along the roadsides, in public parks or squares, local people and tourists wearing colorful clothes splashed water and give their best regards to each other. During the festival, everyone is ready for blessing and receiving wishes from others. Foreighers would get special attention so prepare to be drenched all day. Remember, the wetter you get, the more luck you'll receive.