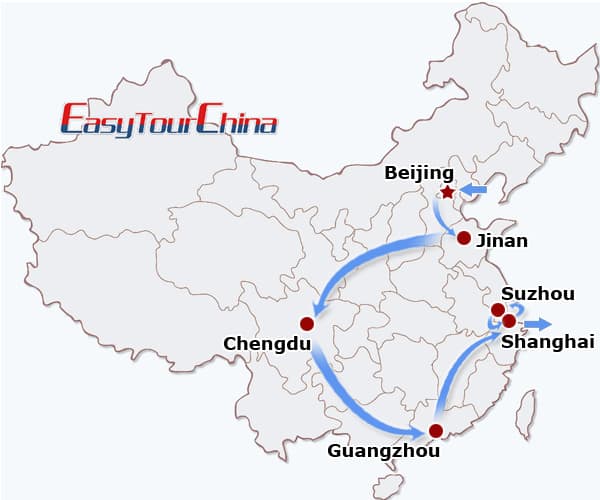 For those who love Chinese food, charm yourself with this gourmet Chinese cuisine & culture tour in 10 days. Have a taste of China’s most famous cuisines, including Lu Cuisine, Chuan Cuisine, Cantonese Cuisine and Huaiyang Cuisine, with their most representative dishes and snacks. You will also travel to some historic and cultural sites, such as Temple of Heaven, Forbidden City, Great Wall and Suzhou classic gardens.

Welcome to China, an ancient kingdom that attracts travelers not only for its history, culture or nature, but also for its various cuisines and tens of thousands dishes and snacks. Landing at Beijing Airport, you will be met by your private guide of Easy Tour China and transferred to the hotel. Spend the rest of the day to counteract Jet Lag.

Visit Temple of Heaven, a public park for locals to do morning exercise and practice Tai Ji, it is actually an important scared religious site, where Ming and Qing Dynasty kings used to worship gods from heaven and pray for harvest and the nation’s stability. The temple is an architectural masterpiece with beautiful color and unique modeling.

Have Peking Noodle with Soybean Paste for lunch at Old Beijing Zhajiangmian DaWang - a local restaurant listed at Michelin Guide Beijing. After that, visit the Forbidden City, nominated as World Cultural Heritage by UNESCO in 1987, is the largest ancient palatial structure in the world and the best-preserved imperial palace in China. Later, go to Jingshan Park that covers an area of more than 230,000 m². Jingshan is immediately north of the Forbidden City on the central axis of Beijing. On the top of Jingshan Hill, you can have a panoramic view of Forbidden City.

Private escorted tour by round-way cable car to Mutianyu Great Wall is planned in the morning. As the old saying goes, "One who fails to reach the Great Wall is not a hero". Therefore, it is the must-see site during your Beijing tour. Have lunch at the local restaurant trying dumplings (Jiaozi), one of the most popular Chinese foods. In the afternoon, we'll take you to have a pedicab tour to Hutong (Beijing's traditional alleyways) to see the local people's life and the traditional Siheyuan-style courtyard houses of Beijing. Dinner has been prepared at Bai Family Courtyard Restaurant or Fangshan Restaurant for the centuries-old royal court dishes of China. 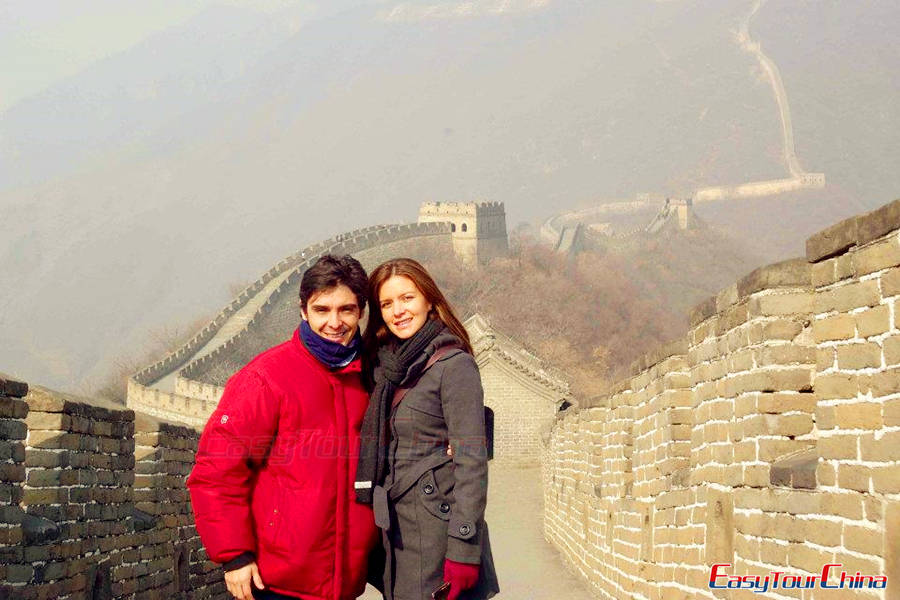 After breakfast, transfer to take a fast train to Jinan (2 hours), the provincial capital of Shandong. Lu (Shandong) Cuisine is the regional cuisine, ranking first of the top eight cuisines in China, with a long history over 2000 years. It blends the Confucianism philosophy and has created the healthy and delicate Chinese foods. Lunch is arranged at a restaurant featured with authentic Lu Cuisine to taste some typical dishes, such as steamed tofu stuffed with vegetables, grilled white treasures, Sweet and sour yellow carp, etc. This afternoon, visit two of Jinan highlight attractions Baotu Spring Park and Daming Lake with a brisk stroll to take in beautiful scenery and digest foods. Dinner at the famous Lu Cuisine restaurant in Shungen Hillview Hotel.

Transfer to the airport and fly to Chengdu. Pick up and transfer to visit Wenshu Monastery. Built in early 7th-century, it was one of the most important and beautiful temples in China, with an elegant layout like a classic garden. Today there are still many people praying and burning joss sticks in Wenshu Monastery every day. Then have a leisurely walking around the old quarters of Chengdu. You will have some Chinese tea and try some street snacks. Enjoy your dinner at a famous local restaurant (Huangcheng Laoma Restaurant or similar) for Sichuan hotpot, a wonderful choice if you like spicy foods. All of the fresh food materials including vegetable, meat, tofu, mushroom are prepared for a unique exciting feast. 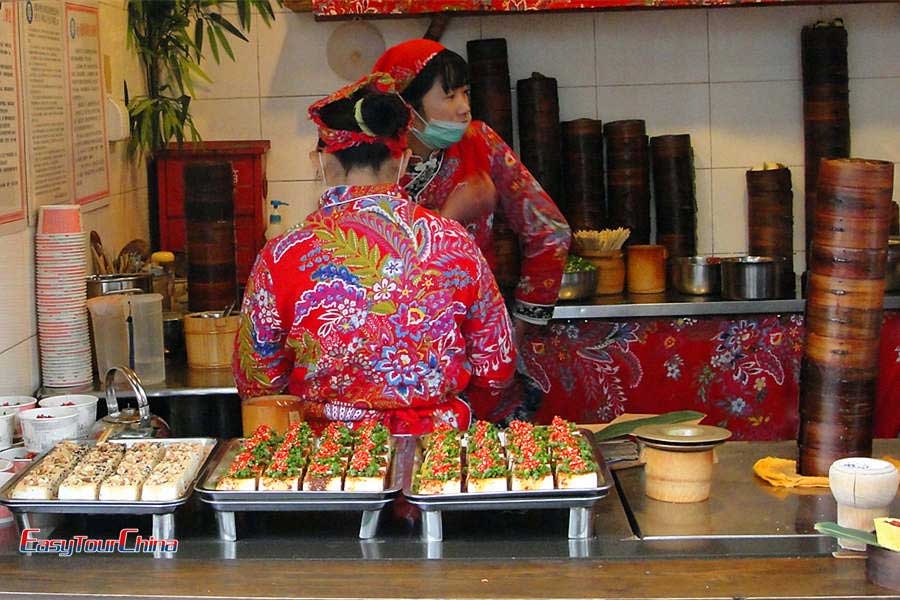 This morning, you can have a happy intimate contact with giant pandas. Drive to visit Giant Panda Breeding and Research Center to see the lovely creatures, which may be having their yummy breakfast, or playing with fellows in the trees or on the grass ground. Lunch will be at Baguobuyi Restaurant to further taste the delicious spicy dishes of Sichuan cuisine (please feel free to advise your travel consultant if you want less spicy), such as fish flavored pork slices, kung pao chicken, boiled fish, Mapo beancurd... After the big meal, transfer to the airport to fly to Guangzhou in the late afternoon. Both Chengdu and Guangzhou are known as the culinary capitals of China. 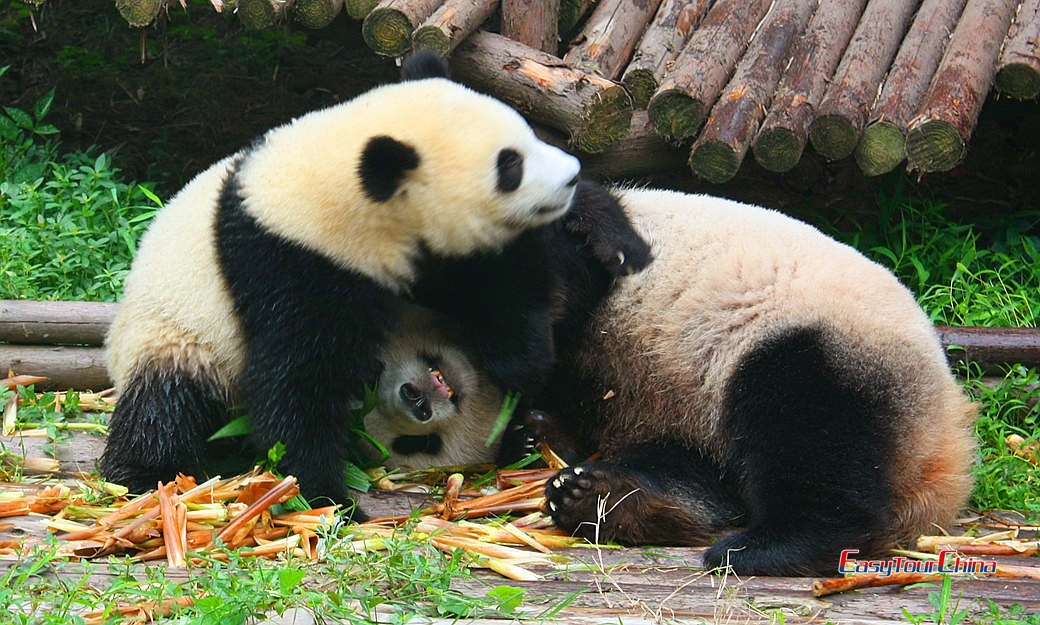 You may have a light breakfast at hotel, and try the several dishes of Dim Sum meal around the noontime at the local well-known restaurant, where many locals enjoy their morning tea break. Recommended dim sum dishes include steamed vermicelli roll, shrimp dumpling, Shumai, steamed chicken paws, steamed ribs with bean paste, etc. Have a walk at Shamian Island area, where you will see some old buildings of the colonial period and witness local people’s life. In the afternoon, visit Chen Family Temple, with exquisite wooden carving architecture, which also houses Guangdong Folk Art Museum inside. Take a break, and eat ice desserts at the famous Shunji Ice Bar.

Then visit the aged houses at Xiguan old city quarters. Dinner at a typical Cantonese restaurant (Panxi Restaurant or similar). Cantonese cuisine focuses on delicacy, freshness, nutrition and multi-layered flavor, and is popular throughout China and even worldwide. Taste the classic dishes from roasted goose, honey-Stewed BBQ Pork to Cantonese stewed soup.

Transfer to the airport and fly to Shanghai. Have some Shanghai dim sum snacks (e.g. Chinese Pudding, layer cake, fried pan bun) at Lvbolang Restaurant near Yu Garden, where hosted the former US president Bill Clinton’s family in 1998.

Pay a visit to Yu Garden, the only fully restored classical Chinese garden in Shanghai which inaugurated in the Ming dynasty. Numerous rock and tree garden areas, ponds, walls and bridges separating various garden areas and pavilions are its features. Then take a walk along the Bund to see colonial architectures and skyscrapers at the each side of Huangpu River, showcasing the old and new Shanghai.

Drive to Suzhou for a full day tour, which is famous for gardens, silk and pretty ladies in China. Our first stop will be the Garden of Net Master, one of the best classic gardens in Suzhou and China, with a relative small size but featuring perfect design and construction. Then visit No.1 Silk Factory and Museum to learn the history and whole making process of silk, from the initial silkworm breeding to weaving and embroidery.

In the afternoon, take a 3-wheel pedicab to the old quarter of Suzhou. Transfer back to Shanghai.

You May Want to Know

Enjoy your last minute of sightseeing and eating in Shanghai, then you will be escorted by your guide and driver to airport. End of your 10 day China foodie tour and fly back home. 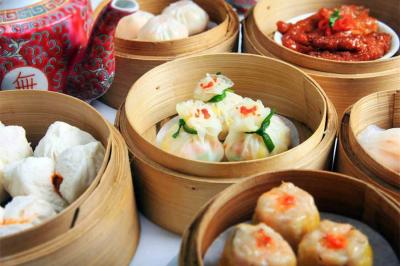 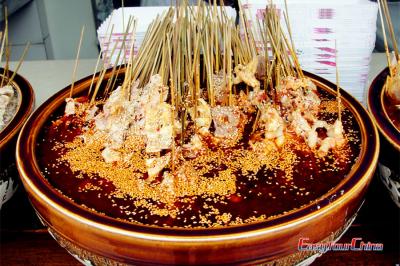 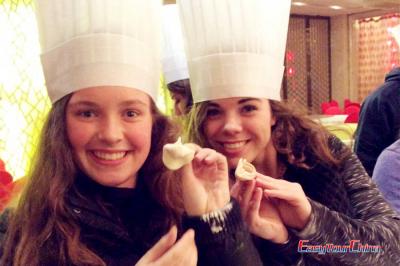