Village Life as a Foreigner in China During the Coronavirus

I’d been in China for almost 10 years when, in 2009, I came to work in the small rural village of Jiuxian (about 8km from the famous tourist destination of Yangshuo). I was initially meant to spend 4 months here but ended up settling in Jiuxian. There were two things which created a huge impression on me during my first weeks in the village and resulted in me staying. The first was how incredibly friendly and welcoming everyone in the village was towards me; treating me as they did their own family. The second was the amazing sense of community displayed within the village. Any event (be it a wedding, birth or funeral) would be a feast lasting several days, attended by two to three hundred people. Everyone would automatically come together and know their roles: shopping; cooking; cleaning; etc. I have been lucky enough to be included in these events and much more. 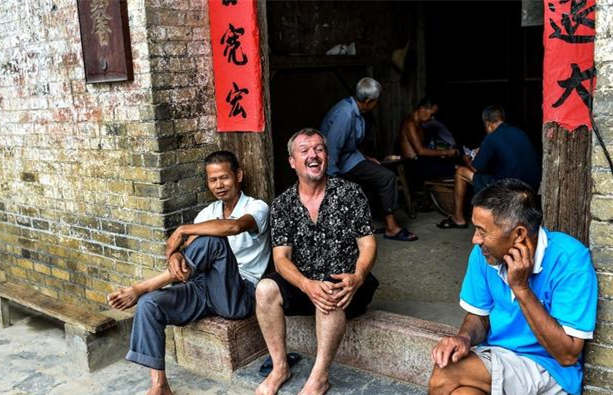 (Ian and local villagers in Yangshuo)

I never imagined how important these two characteristics of village life would be a decade later when the Coronavirus struck.

The first hint that things were about to change in Jiuxian was when I was informed on the 23rd January that I would no longer be participating in a village tug-of-war the following day. Since the event would have seen several hundred people getting together it was decided to cancel village New Year’s celebrations on the 24th January.

On the 25th January the Village Leader, Communist Party Secretary and other important villagers got together and decided to block the routes into the village to prevent travellers from Wuhan (the epicentre of the virus) entering the village. They set up a Wechat group with several hundred families in the village to share information and recommendations regarding the virus. On the 26th all foreign travellers staying in guesthouses within the village were asked to leave. Several teams were set up (and I was asked to join one of these) to man the roadblocks checking everyone entering or leaving the village. The local county government then started to play a larger role supervising and assisting these preparations. They provided face masks, electronic thermometers, hand sanitizer, disinfectant spray and forms to record the details of everyone entering and leaving the village. Notices were stuck on walls in conspicuous places and public announcements broadcast over a loudspeaker that was carried throughout the village. Temporary shelters were erected at the roadblocks so that we could huddle around fires sheltered from the wind and rain. 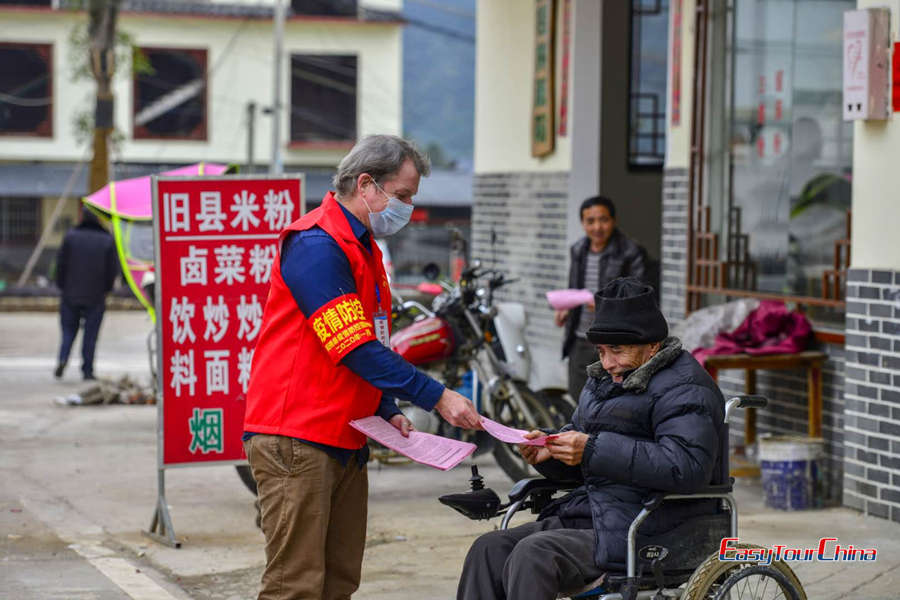 (Ian gives out leaflets to spread knowledge of preventing Coronavirus)

I didn’t leave Jiuxian village for 6 weeks, and although volunteers went shopping every few days for those who needed it, I never had to worry about food. My neighbours all have vegetable plots and also raise their own chickens and ducks. Knowing that I wasn’t self-sufficient various neighbours invited me to their houses for dinner every night. I didn’t have any food to offer but contributed my homemade fruit wine, which was very popular with people needing solace. The amazing kindness and generosity shown to me (the only foreigner in the village) by everyone here seemed in stark contrast to the footage of discrimination against Chinese (or any Asians) I saw on TV. It left me feeling embarrassed and unable to answer enquiries as to why this was happening.

These gorgeous people call me brother, uncle and (a bit unfortunately) grandfather and genuinely treat me as a member of their families. I hope you get a chance to visit China in the not-too-distant future and meet some of the amazing people that I have the privilege of calling my friends and family.