Sour Plum Wine, according to Compendium Materia Medica, has the function of “Quench thirst, produce saliva, adjust the 5 organs (heart, liver, spleen, lungs and kidneys), clean bowels & stomach, and so get rid of ill feelings arising from the disorderly functions of the internal organs”. 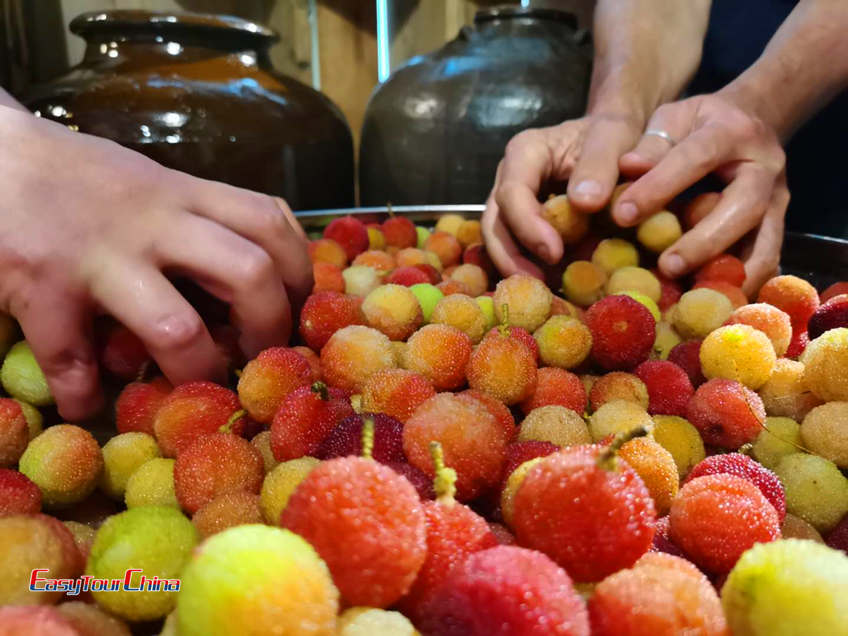 Xiao Chen of Lost World Guesthouse Sanjiang sent over a few pictures of the ripening sour plums in the week of May 20, signaling that we should go the next week. Being a local villager, she knows exactly where the trees are hidden in the hills. But first, I need to get the rice wine ready. 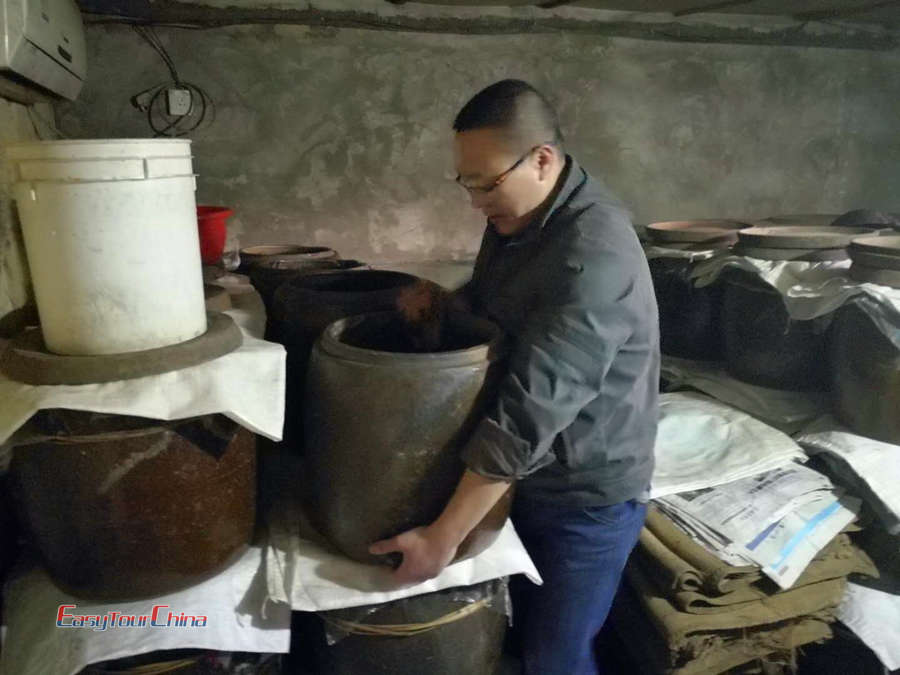 Daxu, an old quiet small town on the bank of Li River, boasts a great rice wine maker. For 3 generations, the family has been making rice wine, passing the recipe from father to son. Huge jars containing 150kg of rice wine are buried underground for wine aging. Many people in Guilin go there for their quality rice wine. And it is our choice too. 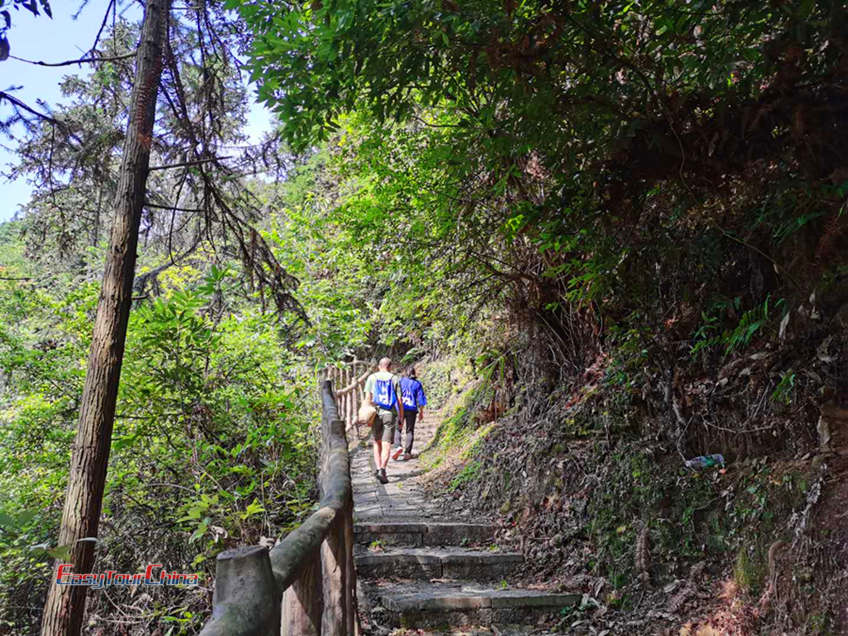 In the morning, Xiao Chen, James, Ian, Tiaotiao (Ian’s Corgi Dog) and me carried some bamboo baskets and headed uphill. The sour plum trees near the paved path were obviously visited by other villagers. But there are still some that has just turned red. Ian volunteered to go up the tree. After picking some within reach, he decided to shake the fruits off. The plums felt down like rain on the slope, some rolling downhill. 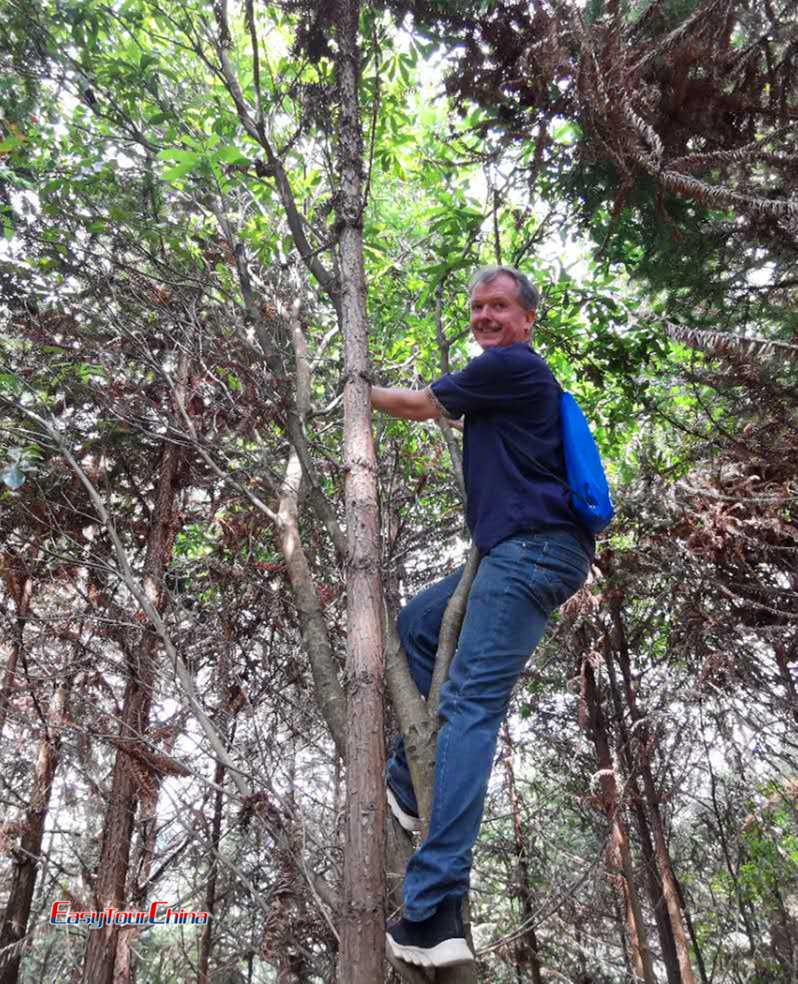 There were also some trees that bear smaller fruits. According to local villagers, smaller sour plums are better for making fruit wine.

Some 20kg of sour plums were picked. They were washed, handpicked (so stems and leaves thrown out), and dried under an electric fan. Two glazed pottery jars were washed and dried the night before. Then we pour the 25kg of 40% alcohol rice wine into the jars. Scooping the sour plums into the jars, I visualized the moment sour plum wine flows into my mouth. 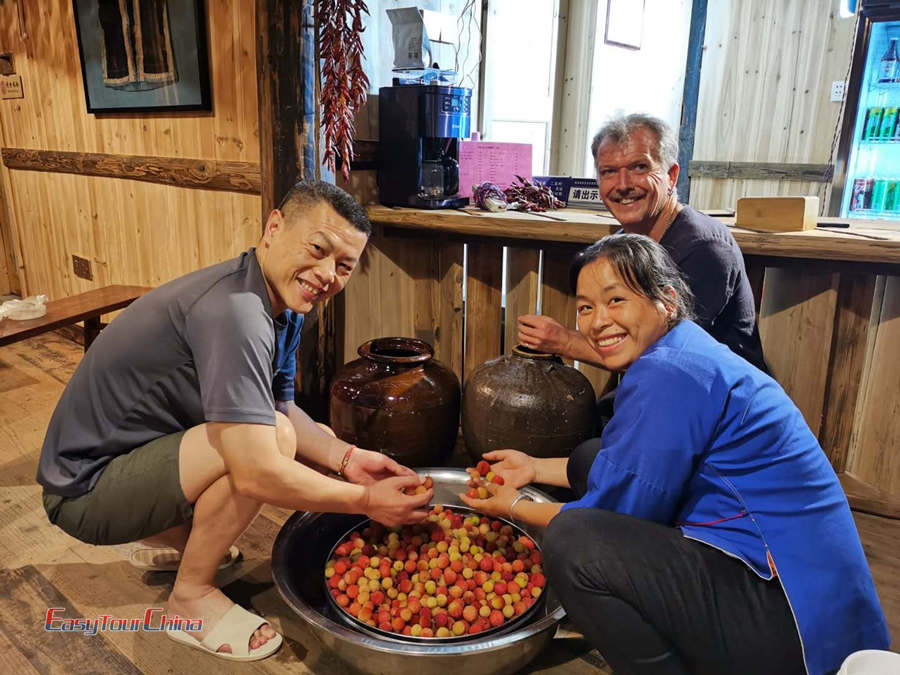 The ratio between sour plum and rice wine should be between 70:100 and 80:100. So for the 25kg rice wine, 20kg of sour plum is good. Jars were sealed and we happily put them in front of the reception counter. Ian’s eyes were fixed on the jars for some minutes. He made two jars of sour plum wine the year before and always treats his VIP friends with it.

3 months is good for the soaking. We will taste it in September.