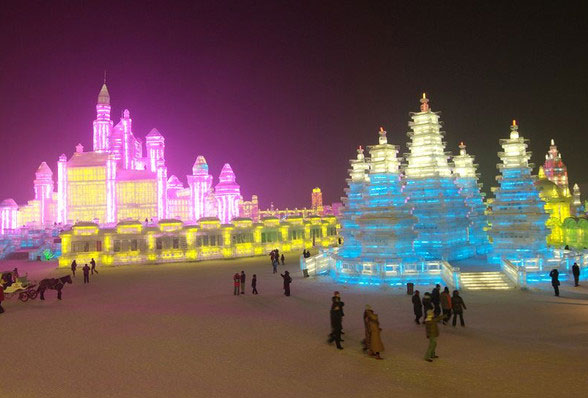 The Harbin International Ice and Snow Sculpture Festival which is annually launched on January 5, is one of the largest ice-carving festivals in the world, and features a range of ice-related activities including ice swimming, hot air ballooning, ice sculpture competitions, and various winter sports.

Blocks of ice chainsawed from the Songhua River provide the material for the sculptures, and competitors use knives and saws to carve the large blocks into animals, mythical figures, buildings, or copies of artworks. Past sculptures have represented such things as castles, towers, the Statue of Liberty, the Great Wall of China, and an onion-domed Russian church. Teams of sculptors come from all over the world and their work - glowing from the neon tubes of purple, pink, blue and green that shine from inside - fills the city square.

The festival includes ice lantern and sculpture exhibitions. Thousands of ice lanterns, ice carvings and snow sculptures turn the city into a dreamlike world of pure whiteness and gleaming crystal. A highlight of the festival is the "Ice and Snow World" - the world's largest amusement park devoted to ice and snow.

Temperature
Harbin is one of China's coldest cities, located in the northeast province of Heilongjiang, where the mercury in January often drops to minus 20 degrees centigrade (-4F).

Best Time to Visit
Harbin Snow and Ice Sculpture festival begin officially on the second week of January annually till late February. But they are actually open to the visitors right after the Christmas, when ice lanterns are complete and 80% snow sculptures are done. By then, you can see sculptors working on them. 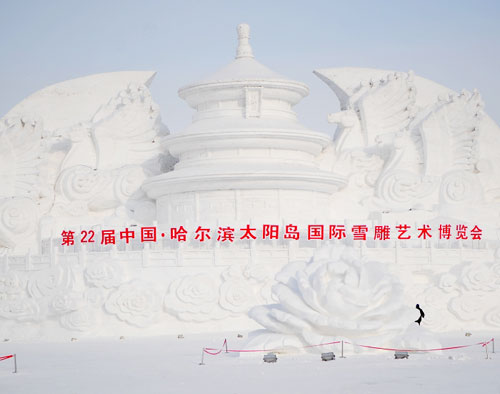 Getting there
Travelers can fly in to Harbin from over a dozen domestic airports or take trains from some main cities, such as Beijing, Shanghai, and Tianjin etc.. There are also international flights to Harbin from Hong Kong, Russia, Niigata, Seoul,  Khabarovsk, Vladivostok and Los Angeles.