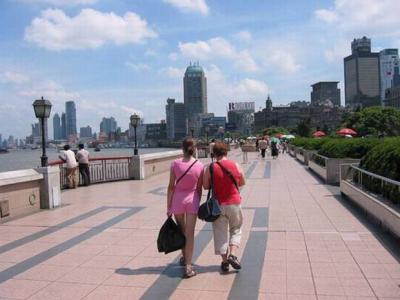 Discover Shanghai on 4-day customized tour from women’s perspective. Shanghai is a magical convergence of the Easy and the West – the ornately adorned skyscrapers rising from the quaint old streets, and the former concessions of the colonial era mixed with bustling traditional bazaars. We’ll see the famous landmarks like the Bund, cruise the romantic water town of Tongli, more importantly, meet Shanghai local women, known as the smartest and most stylish groups of women in China, to see what women’s life is like in Shanghai. Go back home with a custom lady Cheongsam.

Upon arrival, be greeted by your private tour guide in Shanghai (female guide can be arranged if request), and transfer to hotel. After a short rest in hotel, with accompany of your private guide, you will visit tailor’s shop which tailor make lady Cheongsams (also known as Qipao). It’s a type of feminine body-hugging dress with distinctive Chinese features. It was popularized by Chinese socialites and upper-class women in Shanghai during the 1920s and 1930s. It’s your option to tailor make Cheongsam for yourself and it can be finished in one or two days, before your leaving.

Later head forward to visit the Bund. The Bund has a remarkable collection of 19th to 20th Century colonial buildings, which were originally banks, commercial and trade buildings, hotels, customs house, etc. The Bund looks especially fascinated when the architectures are illuminated by lights. Transfer back hotel after the visit. 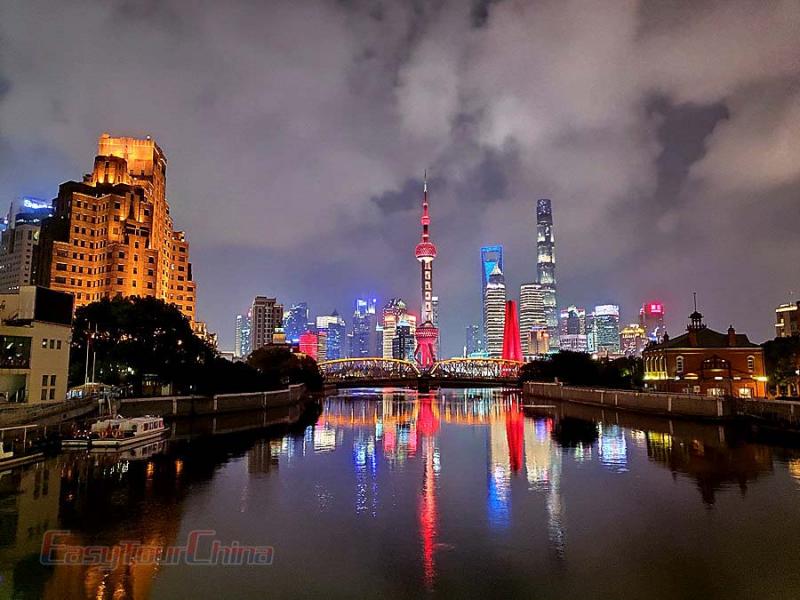 This morning you will set off with your tour guide to visit the People’s Park. It’s a public park in central Shanghai. The marriage market or "blind date corner" in People's Park is a special place in this park. People usually fathers and mothers come here on purpose to help their sons and daughters find a mate. The marriage market has existed since 2004, in which marriage advertisement listings are publicly posted over opened umbrellas. You will know a special way for Chinese women to find a boyfriend or even a husband.

Later walk to the Yu Garden – the only fully restored classical Chinese garden in Shanghai which inaugurated in the Ming dynasty. Numerous rock and tree garden areas, ponds, walls and bridges separating various garden areas and pavilions are its features. And you will have time to visit the adjoining market.

Have a Dim Sum meal for lunch. Dim Sum is a traditional style of Chinese cuisine. It is prepared as small bite-sized portions of food served in small steamer baskets or on a small plate, together with tea. People in Shanghai are really good at making exquisite dim sum. Tasting several kinds of Dim Sum in a nice restaurant, will be top women-like things to do in Shanghai.

Later, head to the Oriental Pearl TV Tower for the best viewing spot of Shanghai. It is a TV tower at the tip of Lujiazui by the side of Huangpu River, opposite The Bund and makes it a distinct landmark in the area. At 468 m (1,535 feet) high, it was the tallest structure in China from 1994-2007, when it was surpassed by the Shanghai World Financial Center. We will also guide you to visit the Tianzifang. Tianzifang is a narrow lane dotted with local style Shikumen Houses, which is one symbol of Shanghai folk culture. Nostalgic brick walls, pieced together with elaborately paved brick pedestrian roads make Tianzifang all the more distinctive from other well-known but banal tourist sites. Boys and girls enjoy tea and coffee at the quaint tea house and cafés. Fascinating stuffs are selling in shops here where you may find something you like. 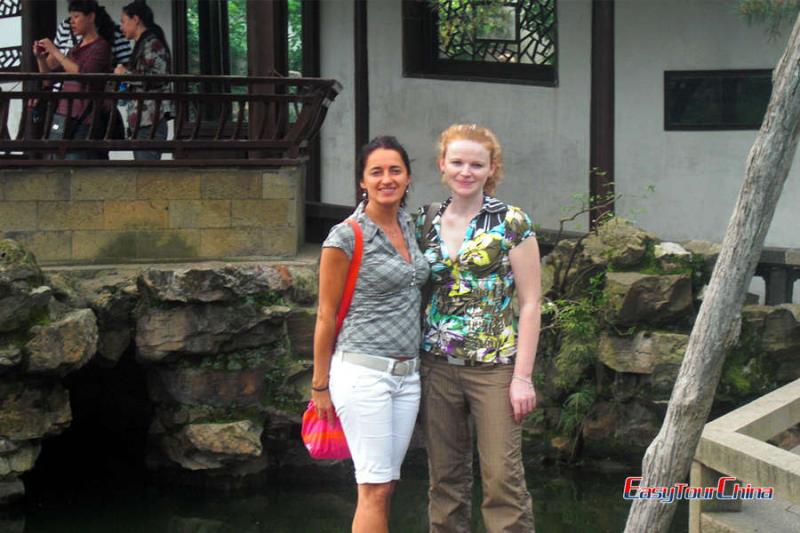 No doubt, Suzhou is a beautiful and more introverted neighbor of Shanghai. This morning, with the escort of your guide, head off to Suzhou by a driving around 2hrs. The first stop in Suzhou is the Master of the Nets Garden, which is the smallest classic garden in Suzhou, but shows the designer’s talent in using of space. Most women travelers love its artistic design and layout with gardens, pavilions, corridors and pools. The second stop is Panmen, a part of the ancient wall of Suzhou. You will see land gates and water gates in this area.

Drive around 30 minutes, you will reach a historic water town-Tongli. Stone bridges and well preserved houses here show you a different face of China. Sailing down a small river by a small boat is a nice way to see the unique water town. This kind of boat is favored by women as it offers a sense of romantic. Return Shanghai after the slow pace visit in Tongli. 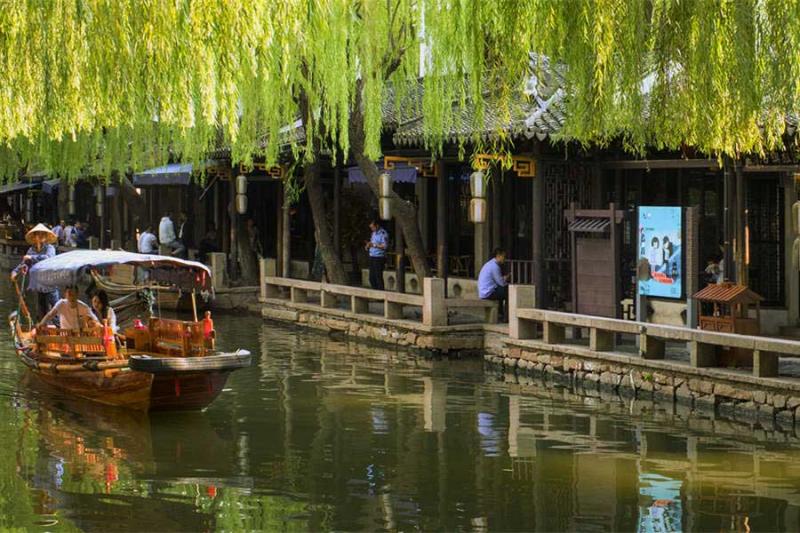 At an appropriate time, you will be privately transferred to rail station or airport for your next destination. 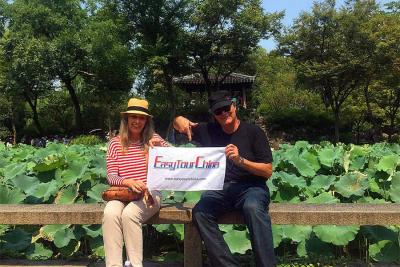 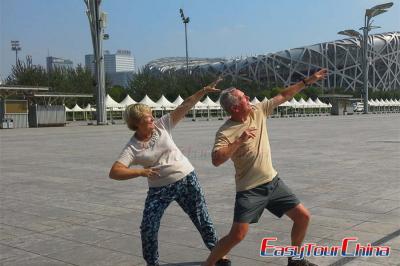 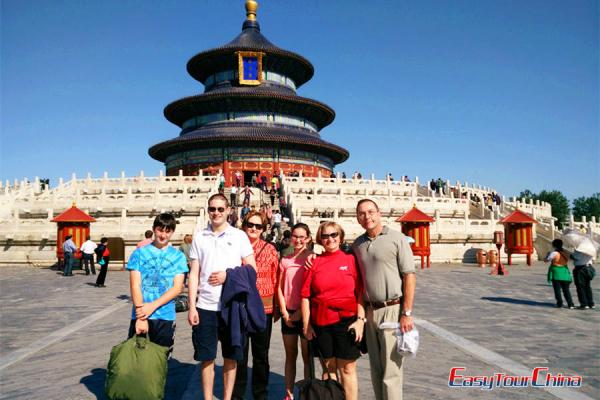