Customize Your Trip to the Real China

China's wine making can be traced back to 2000 years ago. Zhang Qian, who led expeditions to the western territories (Xinjiang and central Asia), witnessed the prosperous wine making there: "Rich people's family housed more than 200 tons of wine. The good ones lasted dozens of years. People drink wine just like horses eat alfalfa."

The wine remained a valued commodity until the Tang Dynasty, when the plants were re-introduced and wine drinking reached a climax. Emperors and their civil servants all regarded wine drinking as a vogue. The production was at full steam during the Mongol ruling time - wine was adopted as the only liquor for important royal rituals. Vineyards were set up in Taiyuan and Nanjing. Wine storage cells were put up in the royal palace with strict technical procedures to tell the good ones from the bad.

With rise of rice liquor, wine got replaced as the preferred wine. Rice liquor was easier to prepare, store and age. Its higher alcohol content was perfect for the cold winters in central and northern China.

In 1892 Changyu Winery was set up in Yantai with modern technologies and oak casks from Europe. This is followed by other foreign companies with wineries in Qingdao, Beijing, Changbaishan and other areas.

Domestic disturbances followed and wine production again was disrupted for half a century before it picked up. Now with the ever increasing living standards of people, wine, a luxury and fashion in the Tang Dynasty, is coming back. 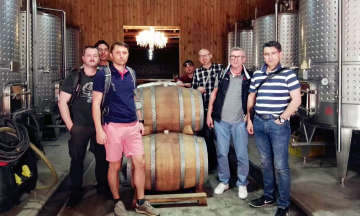