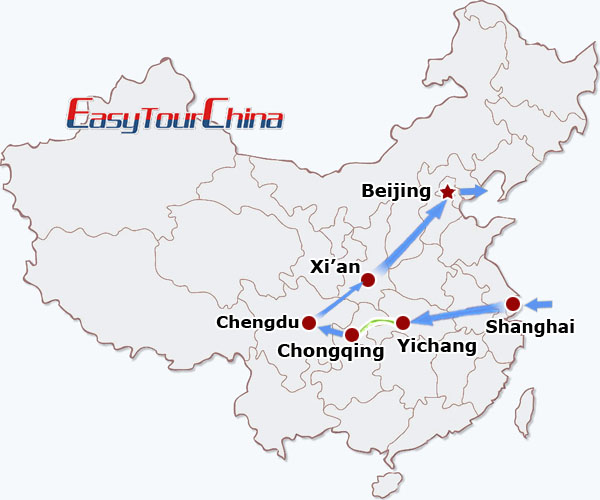 This 14 days China tour by bullet train is an ideal eco-friendly and comfortable way of traveling in China with enthralling experience. You will explore some of the most popular destinations in China, visiting UNESCO World Natural and Cultural Heritage sites. You’ll also enjoy a 5-day relaxing upstream cruise on the Yangtze River from Yichang to Chongqing and see the impressive Three Gorge Dam.

Welcome to Shanghai! Our tour guide will meet you at the airport. Transfer to the hotel. The rest of the day is free for your own exploration.

Full day guided city tour today to explore Shanghai. Tour starts from Jade Buddha Temple, which exudes a powerful potion of thick incense, flashy decorations, and a dark, seedy atmosphere that makes it seem centuries older. And then, transfer to Xintiandi area, which is Former French Concession. Take a walk there and you will have chance to see the site of the first congress of the Communist Party of China and the Shikumen Open House Museum. Oriental Pearl TV Tower is the third spot, which is 468 meters’ height and regarded as one of the best viewing spot of Shanghai by the Huangpu River. Take a walk at the Bund, which once was the financial center of the Far East and is considered as the city's symbol since the 1920s. It is often referred to as "the museum of buildings", as many different old colonial-era buildings can be found here.
Meal: B, L 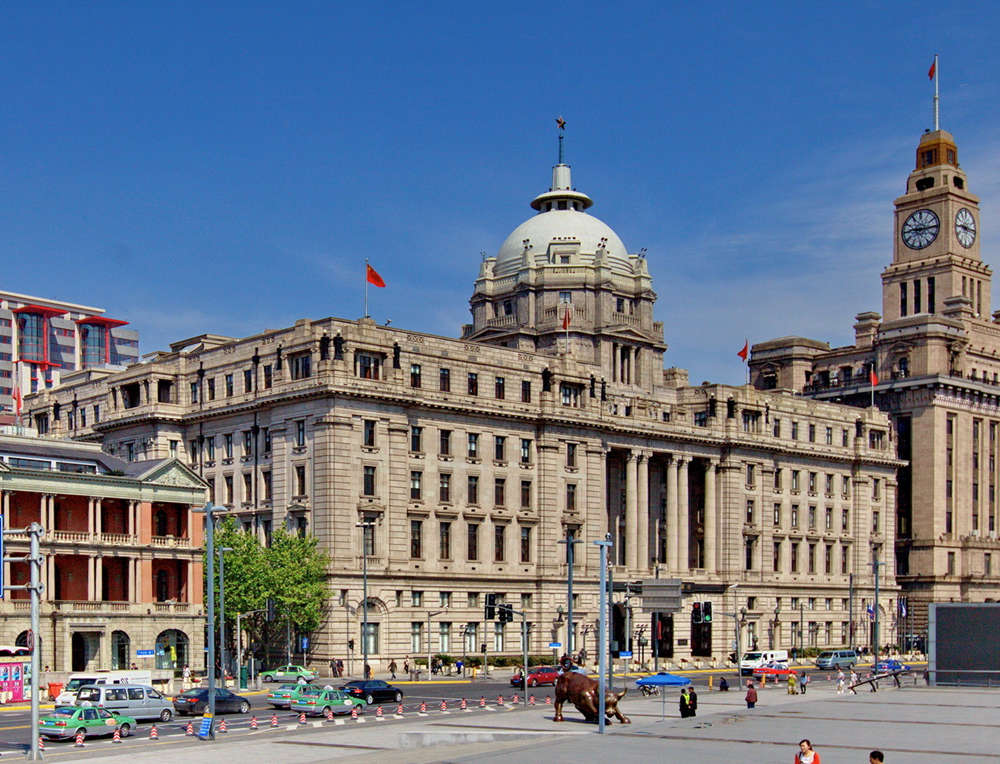 Catch your morning bullet train ride getting to Yichang, taking in the sencery along the way and see the dramatic changes of China. Arrive Yichang, where the upstream Yangtze river start, you drive throught the city, and visit Sanyou Cave Cliff, an local famous cultural and historical site with many ancient poet inscription and some pavilions and sculptures. Board your Yangtze cruise and set sail.

Wake up with the soft sunlight and refreshing breeze. Take it easy for everything, enjoying the morning tea or coffee. Join the master and other passengers to practice Tai Chi. Then take a shore excursion to the amazing Three Gorge Dam: it is the world's largest power station in terms of installed capacity (22,500 MW).
Meal: B, L, D 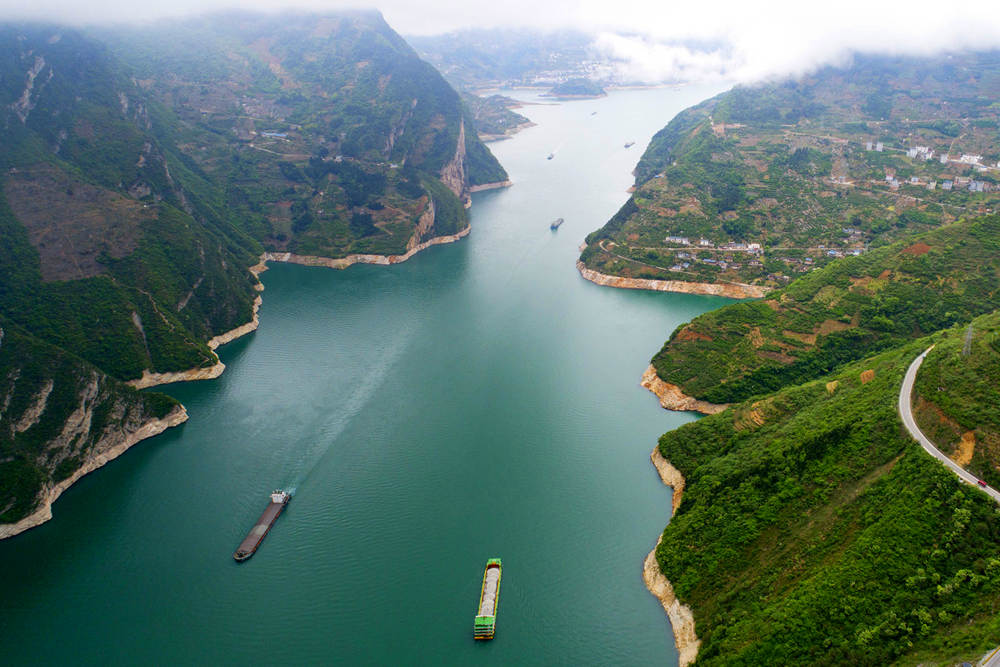 Enter the Three Gorges, one of nature’s most extraordinary sculptures. Today you will pass through the first two gorges – Qutang Gorge and Wu Gorge. Qutang Gorge is the shortest (5 miles), narrowest (500 feet), and most dramatic. The 25-mile long Wu Gorge is known for its quiet beauty, forest-covered mountains, and cliffs so sheer that the sun barely penetrates the precipices. Transfer to another vessel for a relaxing excursion through the attractive gorges of Goddess Stream. Depending on river conditions, an alternate excursion may be substituted to the gorges of Shennong Stream. Enter Xiling Gorge, the longest (41 miles), and the deepest of the Three Gorges. Additional optional Shore Excursion to White Emperor City (river conditions permitting), an ancient city overlooking the western end of Qutang Gorge.

Take a shore excursion to Shibaozhai, with its impressive wooden pagoda, appropriately named "The Pearl of the Yangtze". Depending on river conditions, an alternate excursion may be substituted to Fengdu, visiting the new relocation village built for families who have moved as a result of the Yangtze's rising waters brought about by the Three Gorges Dam. Additional optional Shore Excursion to Fengdu's "Ghost City" (river conditions permitting), known for its statues of ghosts and devils on Mingshan Hill.
Meal: B, L, D

End of your cruise voyage on the mighty Yangtze, and disembark in Chongqing. Pick up and transfer to the railway station to catch your high speed train to Chengdu. After arrival, transfer to visit Jinli Ancient Street, Kuanzhai Alley and enjoy drinking tea at Teahouse or play Majhong in the People's Park.
Meal: B, L 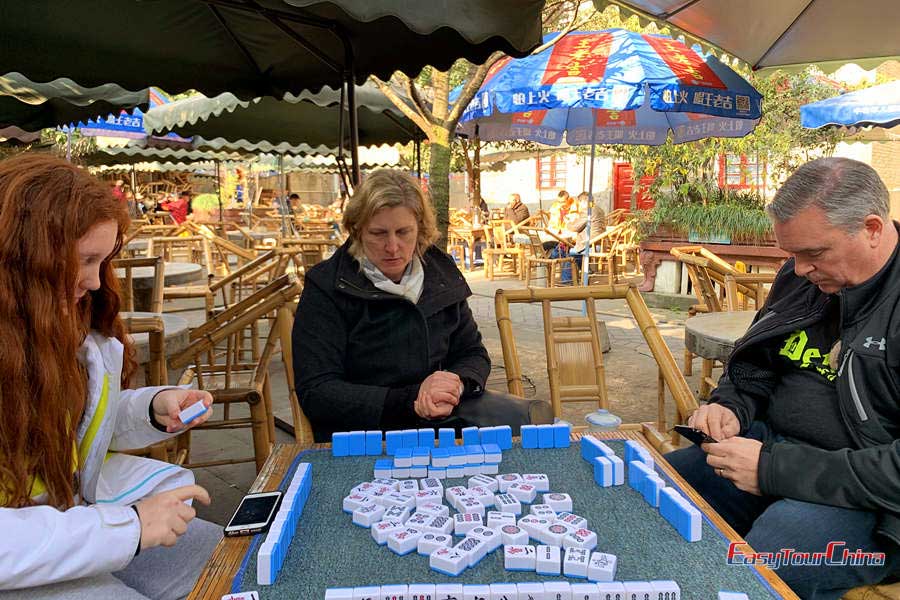 Drive to visit Chengdu Panda Breeding Center to see the cute "ambassador". Pandas are most active during and after their breakfast time.You can see them eating breakfast, climbing trees, rolling on the grsslands... Wave goodbye to the panda and continue your train tour, getting to Xian, one of the ancient capitals of China.

Transfer to Xian’s must-see sight – Terra Cotta Warriors and Horses Museum. It is known as the eighth wonder of the world and a museum to display terra-cotta warriors and horses in Tang Dynasty. Drive back to Xian and go to the symbolic Bell Tower which was built in 1384 during the early Ming Dynasty with a height of 36 meters and covers an area of 1,377 square meters. Then go to the Moslem Street, located at the heart of ancient city of Xian and next to the Drum Tower. It is the hub of the Moslem community in Xian City, and offers a variety of local flavor snacks. 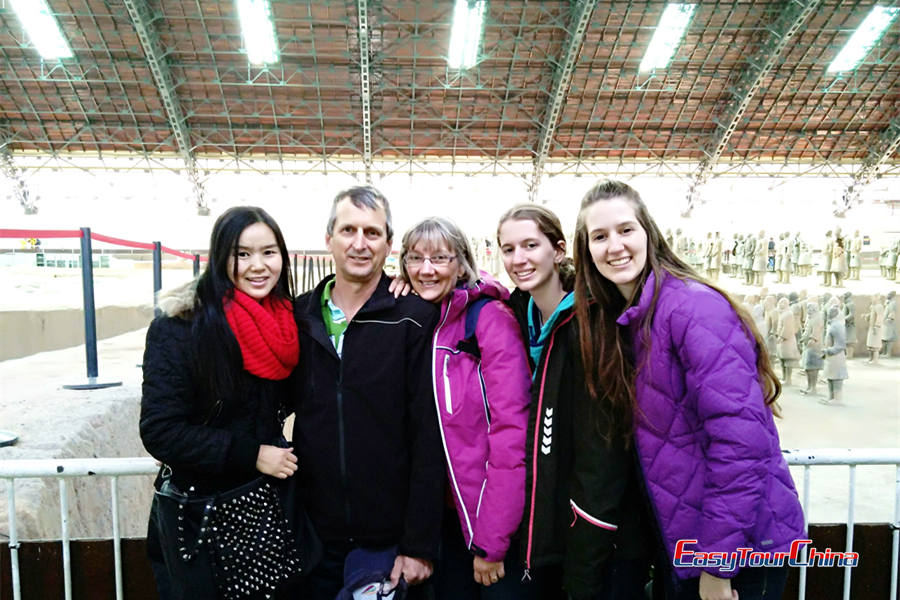 Transfer to visit Xian Old City Wall after check out. Built 600 years ago (1374 - 1378) in the Ming Dynasty, it is the best-kept and biggest city walls in Xian. Then head for Small Goose Pagoda, which is a multi-eave and square brick structure built in the year 707 A.D during the Tang Dynasty (618-907). Take high speed train to Chengdu. Upon your arrival, our guide and driver will meet you and escort you to hotel.

Private escorted tour to the largest city square in the world, Tiananmen Square. Then go to the Forbidden City, which is the largest imperial palace in China for 24 emperors' reign during the Ming and Qing dynasties with a history of around 600 years. Later, move to Temple of Heaven, a masterpiece of architecture and landscape design where the ancient emperors used to pray for the God's bless of the whole nation. 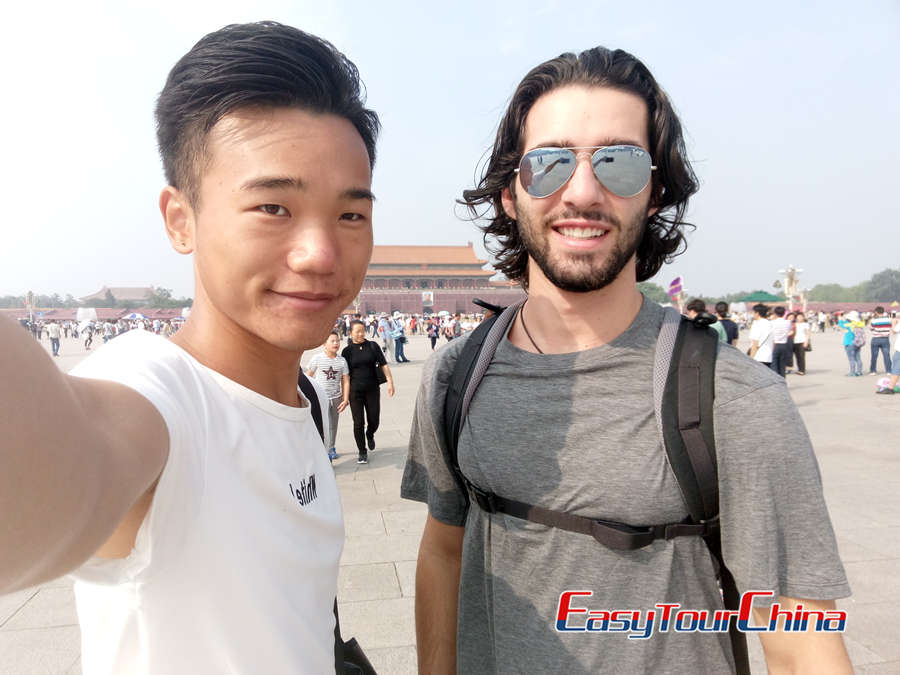 Start your day by exploring the Great Wall at Mutianyu Section (Round-way cable car included), one of the great wonders in the world and the symbol of China. Then go to Ming Tomb which is an underground palace for Ming-dynasty emperors' afterlife. Transfer back to downtown and visit a Jade Gallery en route. Enjoy a famous Peking Duck Banquet for dinner at night (optional)!

This morning visit the famous Summer Palace, a beautiful royal garden with ingenious layout, perfect cultural landscape and architectural masterpieces. A relaxed boat ride on Kunming Lake is a nice optional activity if the weather is good. This afternoon, pay a visit to the Hutongs with a rickshaw ride. You will have a glimpse of the Beijingers' old way of life and traditional Beijing culture. If you're fond of traditional Chinese culture, we can arrange you a hands-on class to learn paper-cutting or learn Chinese calligraphy. 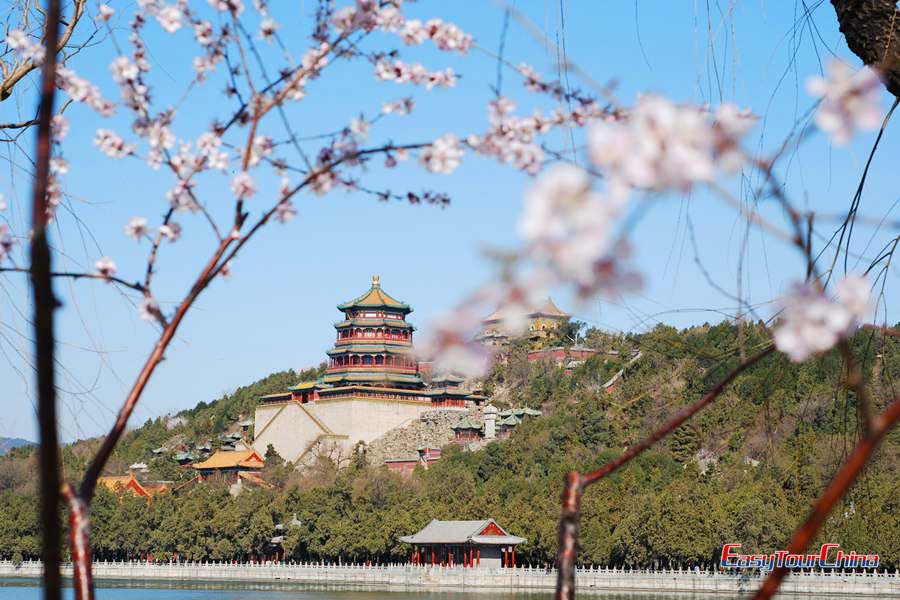 Transfer to the airport, and fly to your next destination or return back home. End of your 14 days China tour by high speed rail. 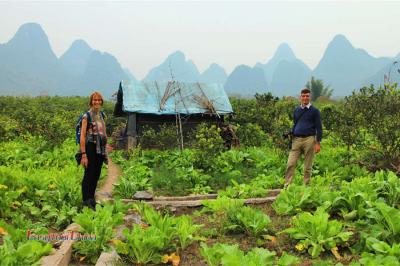 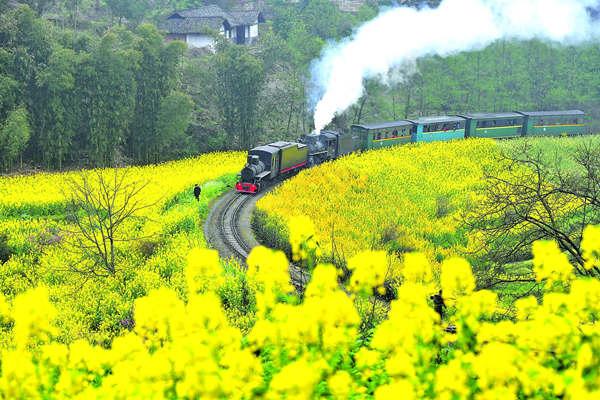 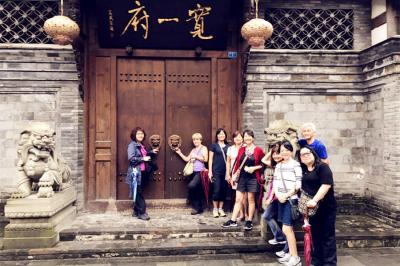